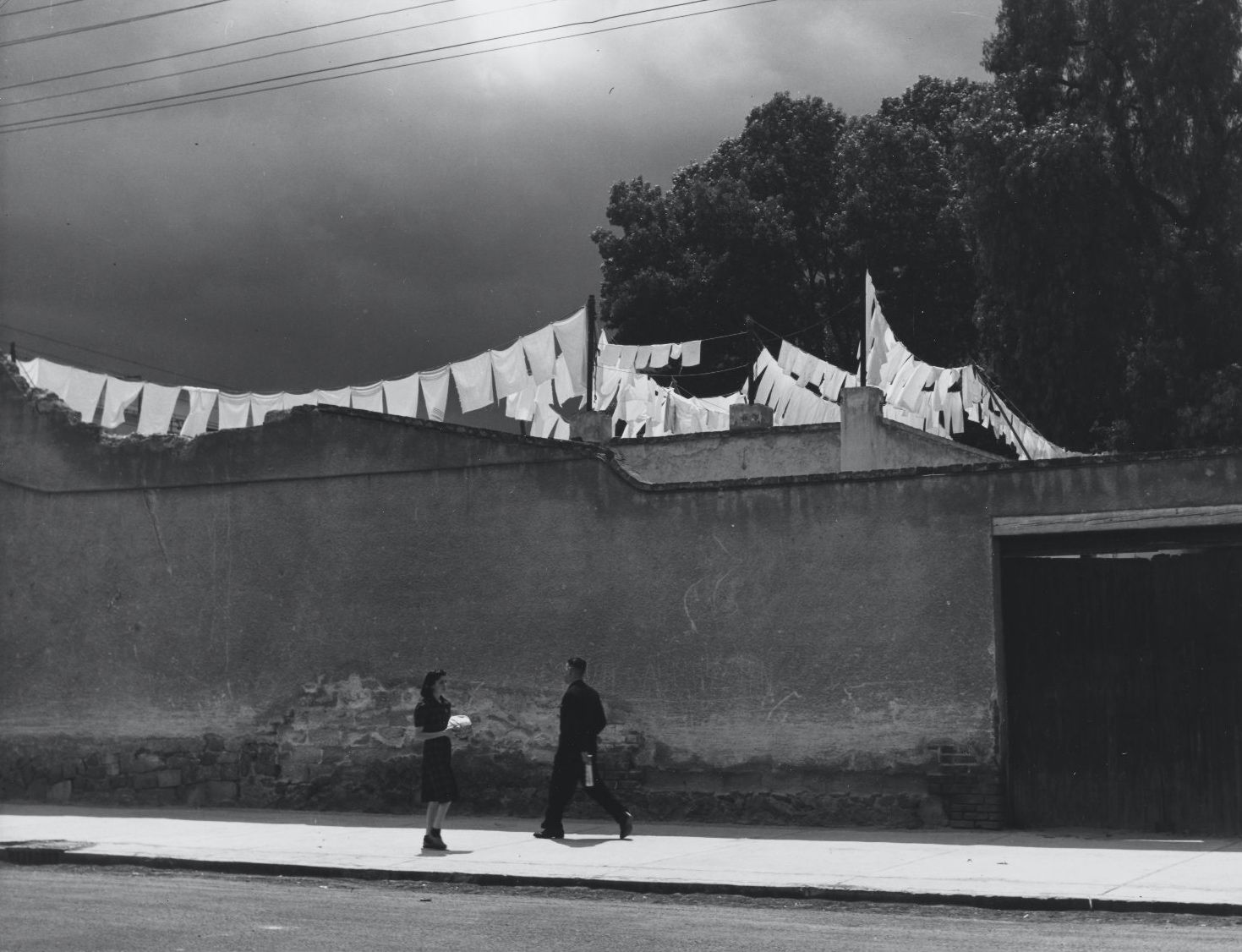 Here’s a simple but curious photo, taken by the late Mexican photographer Manuel Álvarez Bravo: It shows an exposed brick wall under a dark sky, with diagonal power lines crossing the clouds. In the foreground there’s a gleaming sidewalk. On it, we see a woman and a man, walking towards each other. They’re most likely just pedestrians in mid-stride, but the photographer has captured them as though they’re about to meet. It looks dramatic, somehow, that meeting under the dark sky with some stark white laundry fluttering in the background.

The photo comes from a collection of Álvarez Bravos work I recently stumbled up, called ‘Photopoetry’. I wasn’t quite sure what that meant, but flipping through the pages, it slowly dawned on me that this work was, in fact poetic.

Mind you, I have never had much of a knack for poetry. Hell, for the longest time, I considered it some incomprehensible writing with too many line breaks. But then I read a few novels by Roberto Bolaño that turned out to be written rather poetically, and it opened my eyes: Bolaño wrote in a language that was deliberately emotional rather than factual. By that I mean he used words to evoke a feeling, augmenting whatever was actually described on the printed page.

You must surely have experience something like that yourself, in a great book, perhaps a movie, or when listening to some of your favorite songs. A visceral reaction that a piece of art elicits, something that feels not just beautiful, but strangely profound.

You could consider the poetic language a bit of a problem-solver. Telling a good story is hard. But arguably, it is even harder in the small space of a short story or a poem. The space constraints mean that you have to condense or strip down an idea, or express it differently than you would in longform. Through words that normally mean something else. Through metaphors. Impressions. The author Virginia Heffernan has even argued that much short form writing is necessarily poetic, that tweets, for instance, often resort to poetry to express an idea in 140 characters.

What I am getting at is that photos are perfect at accomplishing the same thing. In an instant, they can say accurately what’s difficult to put into words. Take my explanation at the top: As much as I enjoy describing photos in writing, you get a much better, quicker impression of the photo by looking at it. I can give you an approximation by describing stark, white, fluttering laundry over an exposed brick wall. But the image conveys all those descriptions in an instant. Better yet: It is evocative. The photo touches you by communicating more than just a moment and tapping into something much deeper.

In his new book, ‘Why Poetry?’, the author Matthew Zapruder describes the effect like this:

I have found that the poems which have meant the most to me (…) retain a central unsayability, a place where the drama of truly looking for something essential that can never quite be reached is expressed. Somewhere in the poem, or at its end, knowingness stops. You can feel the intelligence in the poem truly exploring, clambering along the words and down the page, and also that intelligence stopping at what cannot be known. Those moments where a limit is reached can often be the greatest, and most honest, in poetry.

I love that. Moments where the limits are reached. When there’s an unsayability. That’s exactly what I see when I look at many photos, especially those by Manuel Álvarez Bravo from his collection “Photopoetry”. He was exceptional at making that happen, because he recognized something profound in everyday situations. Using the camera, he captured what he saw—and some of the photos will leave you speechless, even though there’s nothing in them. An agave plant. A shadow on a wall. A stoop in a house.

Photographer William Eggleston once said that “objects in photos are naturally full of human presence.” He recognized that even frames devoid of activity naturally hint at something. Not necessarily at something that had happened, but rather something that could happen. A sense of possibility.

Photopoetry, then, is a way of seeing. A way of recognizing what sense of possibility is hiding in plain sight. It means elevating a photo any given subject by imbuing it with meaning. Something you can’t put into words, but that’s still there, sensed by the viewer.

Let’s for a moment recall that he did it in the 1940s, when most of the world was fighting a bitter, brutal war. For a time there, art wasn’t much of a priority, and certainly not the poetry of everyday life. Again, Zapruder explains:

The fleeting poetry of a mundane scene glimpsed in the street or captured through a car windshield: in the early sixties, very few photographers considered a supermarket, a light bulb hanging from the ceiling, or the inside of a diner frequented by ghostly patrons to be subjects worthy of interest.

Álvarez Bravo chose to look carefully. And just like him, we can do the same. Walk around with open eyes. Consider the clouds in the distance, the light falling into a room, just so. You might not be able to say why that moves you, but you also don’t have to. Just enjoy that the whole new world that opens up.

Introspection Why a Chilean photographer quit fame in pursuit of mysticism and solitude.

Historical Distance Vitas Luckus was too revolutionary a photographer to be accepted. But his is no ordinary rebel’s story.